Cowdray Park Polo Club has announced that, following completion of his term of office, Roderick Vere Nicholl has stepped down as Chairman of the Club.

The Club’s President, Viscount Cowdray, stated: “On behalf of the Committee we are hugely grateful to Roderick for the enthusiasm, energy and commitment he brought to the role, and for steering the Club through a difficult year.”

The Club is further delighted to announce that Andrew Swaffield has accepted the President’s invitation to be appointed the new Chairman.

A RACEDAY at Plumpton today, Monday January 25, is still subject to a third inspection.

Monday’s other scheduled jumps fixture at Market Rasen was cancelled on Sunday due to a frozen track, which could leave all-weather fixtures at Chelmsford and Kempton as the only action of the day if Plumpton does not go ahead.

Plumpton Racecourse had been hoping that there is no further frost, after a heavy frost yesterday. It had taken the precaution of holding an inspection at 8am because frost had been forecast overnight.

A statement from the track said: “One of the difficulties we have found in the current lockdown is that we don’t have an end date like we did in November/December and so whilst we optimistically hope for relaxations, it feels like more of a slog than ever -especially with Storm Christoph doing his worst.

Below is an example of some damage to our beloved racecourse.

But don’t worry, we had it gone the same day!

As ever thanks for sticking with us and being so understanding. It’ has been a real pity as if you’ve been watching on TV, there has been some really enjoyable racing and the January Jumps fixture was a cracker with some lovely novice performances from Here Comes Johnny (Olly Murphy) and Gericault Roque (David Pipe), although Natural History and Loughan made a thrilling race of Gericault Roque’s victory (a race over 6 seconds quicker than the other division of the same race).

High Up In the Air won his third Steeplechase in a row this season with another beautiful round of jumping for Gary Moore, however Cyclop winning the Veterans Race (Minimum Age to run is 10 years old) from the 150/1 shot Young Turk was the day’s highlight.

The introduction of Veterans’ Races has been a fantastic initiative which seems to be enjoyed by all of the sport, but we can’t have too many as you would not get the runners .It is amazing to think Altior is 11 going for the Champion Chase and how Faugheen won his Grade 1 Chases in Ireland last year as 12 year old).

Let’s hope today’s card is as competitive and enjoyable as the last few. If you wanted a few tips, please do have a look at the Tote’s tips for the day here, and the racecard is also attached.

In the meantime, have a great rest of the weekend and we’ll keep you updated on any developments and if we get to know anything about getting out and about again!

A PARTICULARLY striking performance by the Nicky Henderson-trained Buzz, has earmarked this talented grey horse for a tilt in the Betfair Hurdle, which is likely to be his next outing.

Buzz finished third on his first outing of the season in the Welsh Champion Hurdle behind Sceau Royal. That was an impressive performance itself, but he went on to clock up an easy win at Ascot in November, when he won the race by seven lengths.

Although he was given an 11lb weight rise for that impessive victory he returned to Ascot four weeks later to contest the Betfair Exchange Trophy and finished runner-up to the winner that day- Not So Sleepy- who was receiving 6lb .

The grey finished third on his first outing of the season in the Welsh Champion Hurdle behind Sceau Royal, before bolting up at Ascot in November by seven lengths.

Raised 11lb for that success, he went back to Ascot a month later for the Betfair Exchange Trophy and beat all bar a rejuvenated Not So Sleepy, who was receiving 6lb and won the race for the second year in succession.

“The irony of his last run was that we were beaten by a horse trained by Hughie Morrison – who we bought Buzz off! I don’t think Buzz really saw the winner on the other side of the course, but our horse ran a blinder off top-weight!”

“We’ll keep an eye on everything. It’s unlikely to dry out too much, but he does like soft ground. Top-weights don’t have a great record in the race – which is something else to consider.”

Stafford is mindful of a proliferation of dangerous opponents in what is always a hugely competitive race.

“You usually want to be a novice on the up,I suppose the ones who have stuck out so far have been Cadzand, who was impressive at Kempton, and maybe Llandinabo Lad. Of course there’s the Tolworth winner (Metier) too, who could run – so there are plenty to be wary of.”

“We could use a conditional to take some weight off – but I haven’t discussed that with Nicky yet. I think there’s a fair chance he’ll run, though.” 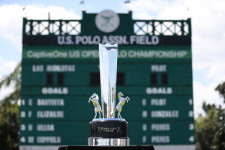 An “invitation only” Virtual Media Day on Jan. 6 provided updates on the upcoming polo season, the safety restrictions for on-site fans, the teams that are competing, how to watch, and an overview of travel to Palm Beach County during these unprecedented times. Video from the event can be watched here: https://we.tl/t-IRo9cDxSNv

The 2021 GAUNTLET OF POLO® will begin with the C.V. Whitney Cup from Feb. 17 – March 7, continue with the USPA Gold Cup®, March 10 – 28, and conclude with the illustrious U.S. Open Polo Championship® March 31 – April 18. Reigning 2019 GAUNTLET OF POLO® Champions Pilot are among the nine teams, seeking to inscribe their name on the trophy for the second time and secure the prize money purse in 2021.

Revising the prize money distribution for the 2021 season, the new format still guarantees a total of $1 million in prize money, however, runners-up in each tournament will also receive a portion of the earnings. $100,000 will be awarded to each of the winning teams of the C.V. Whitney Cup and USPA Gold Cup® and $25,000 to each runner up. Similarly, $200,000 in prize money will be presented to the winner of the U.S. Open Polo Championship® and $50,000 awarded to the runner up. Additionally, any team who wins all three tournaments consecutively will receive a $500,000 bonus and be crowned as the GAUNTLET Champion. Another exciting change from prior years will be a donation made by USPAGL to the final two teams’ polo charity of their choice.

“I’m grateful we can bring polo back to the players, members and fans and I anticipate a highly competitive and exciting season that is not to be missed,” said Robert Puetz, CEO of the USPA. “Featuring the world’s greatest players and equine partners, the 2021 GAUNTLET OF POLO®  would not be possible without the outstanding efforts from all the Team Organizations to persevere through the challenging times and return to vie for the coveted title and largest prize money purse in the sport.”

All three GAUNTLET OF POLO® tournaments will be exclusively livestreamed on Global Polo TV (GPTV), polo’s premier destination for live and on-demand polo content in the world, as well as the world’s largest polo archive. GPTV is accessible at globalpolo.com and on major apps including iOS, Android, Roku and Amazon Fire. To date, more than 130 official USPA events have aired live, 500 on-demand videos and 5,000 hours of content have been available on the platform.

“Global Polo TV is part of the long-term vision of USPA Global Licensing and U.S. Polo Assn., the official brand of the USPA and sponsor of the GAUNTLET OF POLO®,” said David Cummings, Chairman of USPA Global Licensing. “Our mission is to provide polo content and inside polo stories that are accessible anytime and anywhere. With the increasing uncertainty of the pandemic, Global Polo TV offers a safe viewing experience for all our fans and members.”

November 2020 marked the beginning of GPTV’s transition to pay-to-view live game packages for non-USPA members consisting of three package options: the Polo Pass, the GAUNTLET OF POLO® Pass and the Premium Polo Pass. The Polo Pass is the only one of the three passes which excludes the 2021 GAUNTLET OF POLO®. Special offers are available at www.globalpolo.com

Racehorse trainer Zoe Davison died shortly after two of her racehorses, Brown Bullet and Mr Jack had scored an excellent double when both won at Plumpton’s meeting yesterday.

Her stable staff had prepared Brown Bullet and Mr Jack to secure the poignant winning double over jumps. Zoe had continued to train until the end and died aged 60 after a long battle with terminal breast cancer.

Zoe Davison had suffered from breast cancer for the past four-and-a-half years, but her daughter recently revealed it had spread.

Assistant trainer and daughter Gemma said that the family were taking it day-by-day. And just two hours after the second leg of an emotional double for the team at Plumpton , Zoe died in hospital.

Gemma, and Zoe’s husband Andrew Irvine, had run the stables and looked after the horses while Zoe was in hospital. Zoe was a former amateur rider turned trainer, and had sent out more than 100 winners during her career- most of them at Plumpton, where she will be sadly missed.

But it turned out to be a particularly poignant raceday because popular UK trainer Zoe Davison, who had a double at the meeting, was in hospital . She sadly died shortly after her stable’s winning double at the track, where her stable staff prepared Brown Bullet and Mr Jack to win over jumps.

The winner, Brown Bullet, trained by Zoe Davison and ridden by James Best, was impressive, having been held up in the rear for most of the race, but made good headway in the final stages. Brown Bullet took the lead after jumping the penultimate fence, and despite going left was in charge during the final 110 yards to win.

Zoe Davison also sent out the winner of the third race, a handicap hurdle over one mile and seven furlongs, when Mr Jack, ridden by James Davies beat Bard of Brittany ( Sheena West and James Best) by three quarters of a length,

In second place was 4-1 favourite Special Acceptance, trained by Paul Webber and well ridden by Tom O’Brien to take second lace, two lengths behind the winner. A further length back in third place was Benevolent Dictator at 9-2, ridden by Jamie Moore and trained by Gary Moore.

But there was compensation for the Moore family when they sent out High Up In The Air, 11-8 favourite, ridden by Jamie and trained by his father Gary, to win the Handicap Chase over two miles three furlongs from Oxwich Bay, trained by Evan Williams and ridden by Adam Wedge. Further back in third was Rostello, trained by Dr Richard Newland and ridden by Sam Twiston-Davies.

Sunday’s card looks a cracker and let’s hope the feature race is as good as last year’s renewal where a masterful ride from Harry Cobden brought home Christmas in April for Colin Tizzard and the Swallowfield Racing Team to win the Sky Sports Racing Sussex National.

Unfortunately racing is behind closed doors with no public there to see the racing live, but Sky Sports Racing will have a good team there. Tune in on channel 415 or through your betting apps where you can also watch the racing without having a bet nowadays.

The racecard for today with all the runners and riders, includes the last of Plumpton’s Bonus Races this season. The prize is £40k if the horse wins today and then goes on to win a steeplechase at the 2021 Cheltenham Festival.

Race previews by the Tote are a useful guide to the days punting and/or placepots if you did want to have a flutter! Click on url4107.plumptonracecourse.co.uk/ls/click